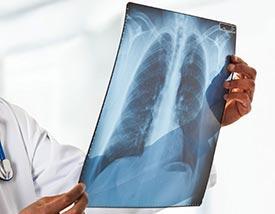 Chronic Obstructive Pulmonary Disease is a condition that includes chronic bronchitis and emphysema. Although they are different, these conditions have some things in common including an association with cigarette smoking and the symptoms of shortness of breath. Patients also have a cough that produces a lot of phlegm, or mucus, because their lungs are inflamed and/or lose flexibility.

With medications and at times supplemental oxygen, the quality of life can be improved and the severity of attacks can be minimized. Bronchodilators, steroids and antibiotics in an individually developed and followed plan are frequently used. 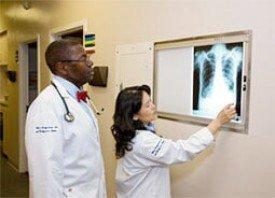 The technical name for Valley Fever is Coccidiodomycosis, or cocci for short. It is fungus that lives in the soil of the western deserts. The spores, or seeds, that spread the organism, become airborne and are inhaled into the lungs, where the infection starts. Valley Fever is not contagious from person to person. It appears after exposure.

About 40 percent of people exposed do not develop the illness. For others the illness may only feel like a cold or a flu. For those sick enough to see a doctor, it can be serious, developing into pneumonia. For a few, the disease further progresses into disseminated form, which can be fatal. The fungus can spread through the blood stream to the skin, bones and or the brain, causing meningitis and other complications.
Treatment includes anti-fungal medications either orally or intravenously. Close monitoring to halt the progress of the disease is prudent.

Additionally the lungs may be clogged with mucus all of which can be life threatening. The management of Asthma includes avoiding exposure to things that trigger asthma (such as pets and dust), bronchodilators and anti-inflammatory agents.

Patients can learn to recognize the signs and symptoms of decreased lung function and the appropriate use of rescue medications so control of the process can be gained and severity of attacks diminished.

Alpha1-Antitrypsin Deficiency is a common but under-diagnosed genetic condition. It is associated with chronic air flow obstruction and shortness of breath. Although smoking and/or exposure to inhaled irritants, aggravates and speeds up the disease process, non-smokers can be affected as well. Testing for AATD consists of evaluation of the symptoms, and when appropriate, Pulmonary Function Tests and serum levels. Treatment is similar to the care of COPD along with specific modalities for AATD. Alpha 1-Antitrypsin Deficiency can be severe and debilitating. However, with aggressive therapy the disease progression can be slowed and the quality of life improved significantly.

We treat the following:

Office Hours
Get in touch